Failure is part of life. Everybody has failed at something at one point in their lives. If we let that get us down we wouldn’t accomplish anything. I look at my 10 month old daughter. She is currently attempting to stand on her own. She can pull herself up if there is a table, chair or leg around for her to hold on to. Once she is up she will let go and try stand on her own. Right now she falls down after a few seconds, cries a bit and a few minutes later she is trying it again. According to the definition of failure, a lack of success, she failed.

As my daughter gets older and is learning life skills she will fail at things. We often see failure as a bad thing. My daughter will learn from those failures and hopefully be able to correct what went wrong and continue to progress.

If my daughter gave up after the first time she failed at standing then I guess she would never stand, or walk for that matter. That is a fairly extreme example but if we all gave up after we failed at something many of us wouldn’t be walking, driving, have a significant other, have a job or possibly have an education. Especially if what we have stopped was just one step in a progress to get us to an ultimate goal.

When it comes to health and fitness as adults we often fail. That by itself is not a bad thing. The problem arises when we give up and don’t try again. What is just as bad is when we try again we do so without making any changes from why we failed the last time. Can you imagine doing the same thing over and over again but expecting different results?

Insanity: doing the same thing over and over again and expecting different results. – Albert Einstein 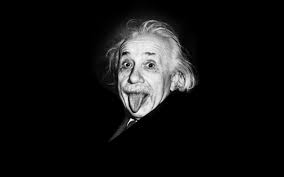 If we failed a school test or a driving test we hopefully sit down and look at what we got wrong, think about  the correct solution and learn the information so that the next time we will get it right, or at least don’t repeat the same mistake twice.

As a society we need to take that same mentality and apply it to weight loss.

If you tried a diet, pill or potion and it didn’t work. Don’t try it again until you figure out what went wrong in the first place.

I don’t recommend fad diets or weight loss pills in the first place, but whatever intervention you tried and didn’t have success with you need to analyze.

What was the reason you stopped your diet or exercise plan?

What the diet or diet change to restrictive?

Was it not working to your standards?

Were you hungry on the diet and just decided to stop?

Was the exercise sessions too hard?

Were the exercise sessions too long?

Were things too expensive?

Did you not have the support you needed?

Once you think about why you stopped, think of solutions that will help you overcome that if you happen to run into it again. Make a plan to deal with the reason for stopping.

Think about why you stopped and what you are going to do next time to prevent the same thing from happening.

Take everything you do in your quest to burn off those excess pounds as a science experiment. It’s not failure, you are just learning how not to do something.

Imagine if Edison stopped when he failed at building the light bulb. 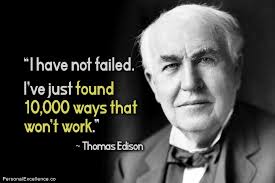 If you do the same thing over and over again you are doomed to fail. If you change a small thing and fail you didn’t really fail, you learned something.

Health and fitness are very new sciences when compared to math, physics and chemistry. And with weight loss and fitness there are many variables and factors to take into account. As well everyone is different with different like, wants, needs, tastes, physical abilities, allergies and goals. You know you better than anyone else. You know what is going to work for you and what is not. Health and Fitness is important but the information out there is not a one size fit all.

Any programs, diets or routines need to be adjusted to fit the individual. That is why it is called personal training and not copy and paste / one size fits all training.