To answer the title question yes!

When we “eat well” or at least say we eat well and we think  we should be losing weight. If that doesn’t work we blame our metabolism, or we say that it was the type of calories we were eating, not that we we eating too many of them.

Depending on whom you ask or what you read the key to weight loss is Calories in versus Calories out. Meaning if you eat less calories than you burn each day your body will be forced to tap into its stored fat for energy. You will burn this fat for energy and drop the pounds you are wanting to.

Can it be that simple? Is this the cure for obesity? Well yes but it is not that simple.

The problem is that most people have a major problem counting and keeping track of the actual calories they consume.

I have actually run into this several times as a trainer. My clients tell me that they are eating healthy and that they have cut their calories to the level that we talked about. I keep detailed records of their exercise program, but they are still unable to lose weight.

At one point early on in my career I started to doubt myself. Either I was not good at my job or my clients were lying to me.

Both untrue, I was definitely good at my job and my clients we not lying to me, at least not on purpose.

Dr. Steven Heymsfield, an obesity specialist at St. Luke’s-Roosevelt Hospital Center in New York City, found the exact same thing; the “eat-less-move-more” mantra did not work for many people.

What did Dr. Heymsfield do? He did a clinical study to find out what exactly was going on.

Dr. Heymsfield had twenty of his patients that could not seem to lose any weight consume isotope labeled water that would allow the Dr. to track exactly how many calories the patients expended. Sometimes referred to as Doubly labeled water.

For anyone interested the isotope labeled water is called Heavy Water sometimes written as D20. The stuff is pretty cool. Besides being able to tell you exactly what your metabolic rate is, if you make ice cubes out of it they sink when you put them in water.

The patients had no idea why they were drinking this special water the doctor gave them. Basically the doctor was spying on them or at least double-checking their caloric intake and expenditure.

The results were what some might expect. 18 out of the 20 participants were vastly under reporting their caloric intake. Some actually ate twice as much as they recorded and only exercised half as much as they said the did.

The Doctor suggested that the patients weren’t lying, they were just underestimating. This seems to happen a large majority of the people trying to drop weight by keeping track of calories. He went on to even suggest that the heavier the person is the more they tend to underestimate their caloric intake.

Dr Heymsfield did a second study, this time telling the participants what the water was used for. When the results came in and compared the food journals were much closer to what the actual numbers revealed by the water were.

In today’s society fast food advertising is right in our faces and the sedentary culture that we embrace is creating a perfect storm. People are able to justify to themselves they are not overeating and they are exercising enough to lose weight.

When people try and don’t succeed to lose weight they blame their metabolism or something else, where in reality they are really eating too much food. 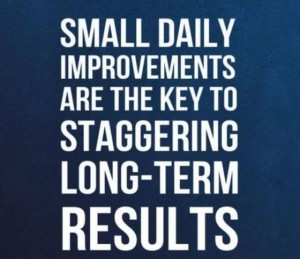 Many that are overweight blame their metabolism but really it is the number of calories you eat. The answer to weight loss isn’t sexy or quick and there is no trick.

Advertisers do a good job of convincing you that the trick is in a bottle, book or video. The weight loss industry thrives on failure. That is why it is a multibillion dollar a year industry. The  amount spent on weight loss in the United States is 20 billion dollars per year. That’s more than the GDP of some countries.

If all that money spent on the weight loss fads, pills and gimmicks really worked why is there such an obesity epidemic?

This may be depressing to some out there trying to lose weight but it shouldn’t be. It should actually be encouraging. The study by Dr. Heymsfield  shows that it is possible to lose weight by a reduction in calories as long as you are honest about the number of calories you consume.

Weight loss is within your means.

Don’t forget to sign up for my newsletter to be informed when new blog posts get put up.